The second quilt to turn into a comfort quilt from Julie was the one that Julie tells the story of on this link. It was made by Lynne Tyler of The Patchery Menagerie. She sent it to Julie as a trade for her quilt named Partly Sunny.
After taking it out of the box, I put it on the wall and drooled over the fabrics. Oh my, what florals. I thought it needed to be just a tad longer in proportion to its width. After raiding my floral stash in the cupboard (and making a huge mess), I chose three lights and three darks- for the top and bottom rows. I found a nice dark blue- does have a water ring pattern on it (why did I not buy more of this?) for the corners. I thought I was better at inset points, but I persevered and there was only minor ripping.
I found a large dark floral with purple roses for the backing. It is such a rich quilt, can't stop looking at it. I  have a large dark black and purple floral that I have enough of for the back. Yahoo. 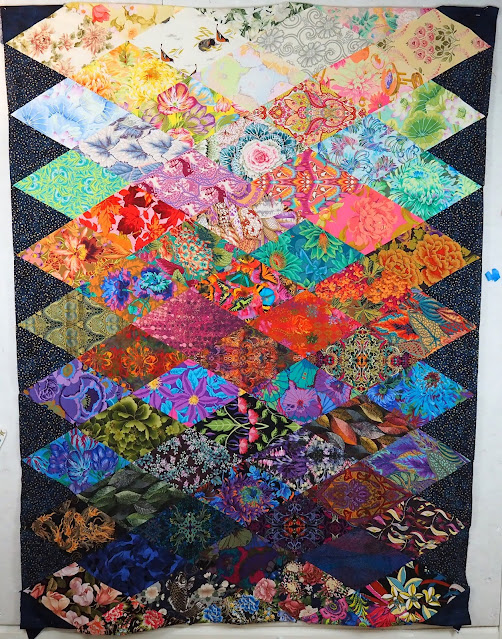 My neighbor had an Open Garden- just spectacular small space,  as part of our town's Garden Walk. I asked him what some of the plants were and he said he did not know. I told him I knew of a plant app, but it was by subsciption. He said, "Give me your phone". He went to Google, next to the microphone on the search bar, clicked on it and the camera opened. He clicked on the plant in question and Google gave us some choices and all the care info. Maybe most people know this, but I was totally surprised. You can bet it will get a work out from now on.

Here is the window you need on the smart phone after you open Google. It is called "Google Lens". It was downloaded on my new (hated) iPhone already. Look at the icon in the red circle and click on it: 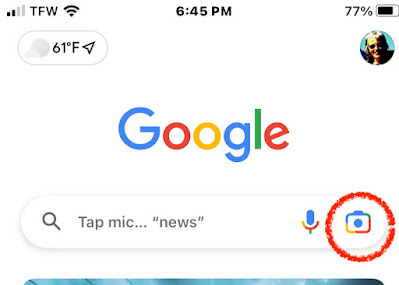 Posted by Linda Swanekamp at 11:47 AM

Email ThisBlogThis!Share to TwitterShare to FacebookShare to Pinterest
Labels: Diamonds

WOW! This one is REALLY pretty! I'm looking forward to seeing what you do with it - ;))

Just for the record, the top was made by Lynne Tyler of The Patchery Menagerie. She sent it to me as a trade for my quilt named Partly Sunny. In the end, she and I agreed that GEODE would make a marvelous comfort quilt so I sent the top to Linda.

Boy - that is really pretty too!!
I would like to see it again when you have quilted it!

Love those luscious fabrics, this will bring such a lot of cheer and comfort.

What an interesting phone feature! I hadn't heard of that before. Thanks for sharing!