I can only hope everyone I mailed a Valentine card to, received it. I know Maureen would not yet as New Zealand is far from Buffalo, NY.

Every year I fear I won't come up with an idea that I can make multiples of without repeating each card exactly. This year I found some Valentine fabric at Joanns that simplified things. I was able to fussy cut foil stamped hearts, attach them to purple batik with Superior Twist thread (sews like a dream) using felt as backing and glue to pre-scored cardstock. It took awhile and I sewed most of them during a Treadle On Zoom meeting a few weeks ago. I used one of my trusty, beloved Singer 301s to free motion the hearts.

I have this quirk (some say flaw) that I cannot make the same thing over and over again, so I have to vary each design a bit.

Here are the cards in process: 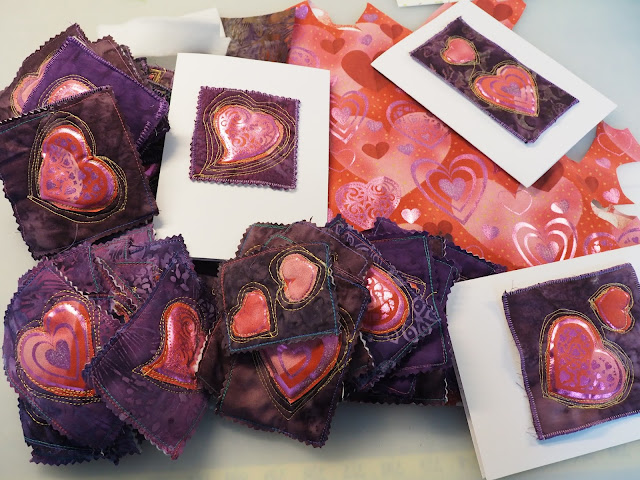 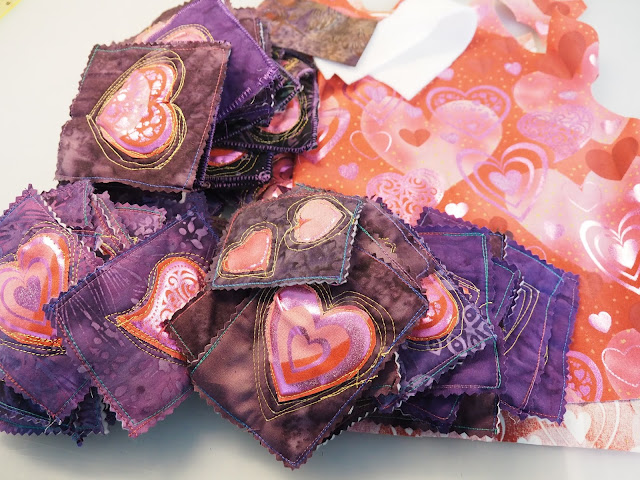 Posted by Linda Swanekamp at 1:25 PM

Email ThisBlogThis!Share to TwitterShare to FacebookShare to Pinterest
Labels: Valentines

Did you show these during the show-n-tell? I missed part of that (getting lunch). Cute!

I am more than thrilled to be on your art list. xo

I received mine and I LOVE IT! Thank you very much Linda. The message and the card are beautiful.

Mine is on display on my fireplace mantel. We both love it!

Yes, yes, mine arrived! It was a day brightener and so cute. I love being included in your card gifting. I have quite a little gallery on display of cards from you and others. Each one may be different or a varied version but so special. Thank you.

Such an effort of kindness - I'm grateful to be on your list of recipients.

I don't think its a flaw ! You are so creative - and thank you for sharing your love!!! ( it was much needed at that moment!)

LOVE the card that arrived in my mailbox, Linda!!! I'm with you on not wanting to make the same exact thing time and again. Hoping you had fun with the making because your Valentine was SEW much fun to receive!

These are amazing Linda! Mine will take some time I know and thank you for thinking of me, I have your cards of previous years on a sort of mood board, always lovely to look up and see them all there.

The card is beautiful! I am so honored to call you friend!