As part of the Upstairs, Downstairs challenge with A Left Handed Quilter, I continued on making blocks and was able to lay them out on the wall. I clipped them in columns waiting for an opportunity to web them. I waited until all the blocks were sewn (all 8 sets) before I ironed them with my steam Euro Pro. I never use steam until the blocks are sewn so I don't distort the pieces. I followed the directions and laid them out simply and I think it is a pleasant refreshing quilt. 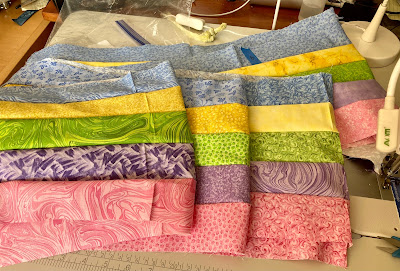 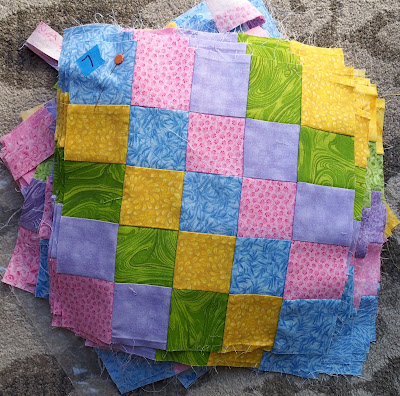 What I found amusing was when I was working on the blocks at my daughter's in PA, her cat plopped on the process. Later, at home, Mr. Tugger did the same to the blocks. Different states, different cats, same response.


Posted by Linda Swanekamp at 1:48 PM

Email ThisBlogThis!Share to TwitterShare to FacebookShare to Pinterest
Labels: Upstairs

You beat me to it! I'm webbing mine now - and will post it when I'm done. Yours looks TERRIFIC! It will be fun to compare them - when I get there - ;))

Cats are so funny.
It will be interesting to compare your quilt with A Left Handed Quilter's version

Very pretty quilt top in the making. Too funny about the two cats!

That's going to be a very pretty quilt!

Lovely finish, the soft colours remind me of the sherbert lollies we used to buy - many years ago now! Good to read the two cats gave their approval.