Sometimes you don't get what you think

Last April, I went to a quilt show and saw a quilt that inspired me. I took a photo and when I got home, I drafted out what I wanted. I was looking for floating floral squares anchored by a diamond. I never use black, but because the quilt I saw used it successfully, I used black, but made it scrappy blacks so it would not look all solid.  I made a sample block to see if I liked it. I made 4 samples to see how it looked together. Fine. The 30 blocks had lots of pieces with precision. I used the Accuquilt to cut the squares and triangles which works wonderfully- no trimmng, preciseness. I used the fork pins to hold the intersections and was satisfied with that.
Today, I put 25 of the done blocks on the wall to motivate me to finish the last row of five. When I stepped back, I was not happy. I seemed to have lost the floating quality. All I see is black diamonds, not the florals which I wanted to be the focus. I do not where I went wrong. Now, sadly, I am sewing the last five blocks to put on the wall. This was going to be a quilt for me, but now I am not liking it. 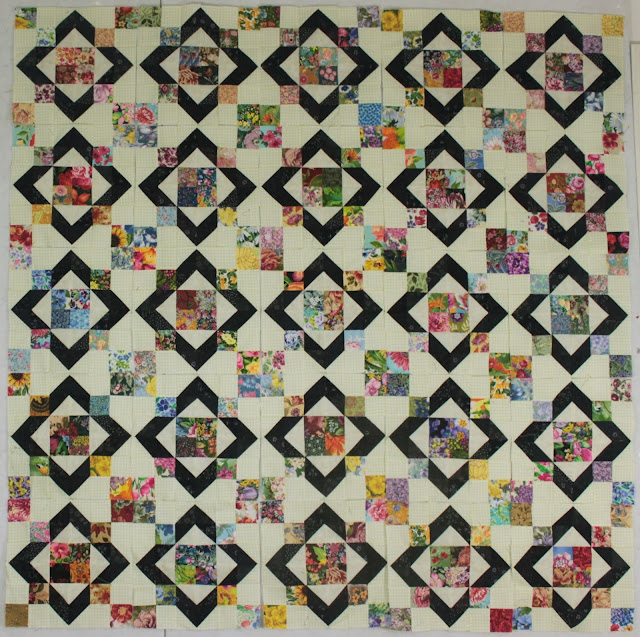 Posted by Linda Swanekamp at 3:01 PM

How does your quilt differ from the inspiration quilt? Are some of your florals too light in value to hold their own?

It is a pretty quilt even if it didn't match your vision.

I understand what you're going through. I'm going through something similar with sashing a sampler quilt at the moment. Nothing I throw up on the design wall looks 'just right.' Looking at the vintage/antique inspiration quilt photos you posted, it appears the black fabrics in that quilt had faded quite a bit and the florals also. Maybe yours will require a bit of aging in some sunlight to achieve that same soft effect. The added dimension achieved when you quilt it will also create a softening effect. Don't give up on this one, it's too pretty to throw in the towel!

What are you thinking of binding it with? That might make a difference...

what about adding a thin border of your favorite color... or yellow or a yellow floral. I say yellow because I see lots in the blocks. I hate it when my mental image is better than real life. A problem I often have!

I don't exactly remember the photo inspiration, but I bet it is a value problem that is making it different. Is the background too white, maybe. Would a cream to beige fabric have worked? I still think it is a beauty. Use the black to do a narrow border to anchor the whole design....then a light final border. It might still just float:)

My two cents - from a slightly different perspective - ;)) Following Wanda's lead, I went back to see how your quilt differed from the inspiration quilt. Instead of your florals being too light to hold their own - I think they might not be light enough. In your original post - you said - "it had this wonderful quality using florals and black, which I rarely use. I took a photo with the phone, drafted the block, and made a sample block. I made sure I used florals that had some saturation and not too light like the one I saw. The effect I was hoping for, a floating of the florals, I think is happening." The "too light" might be what made the original "work" - ;))

It's a nice quilt, even if it doesn't match your vision. Maybe with a light blue instead of the black, would help it to float???

I do see where you are coming from with the black diamonds but perhaps, as others have said, the addition of a narrow border of black would fit or maybe as Cheryl says above perhaps a lighter blue would fit.